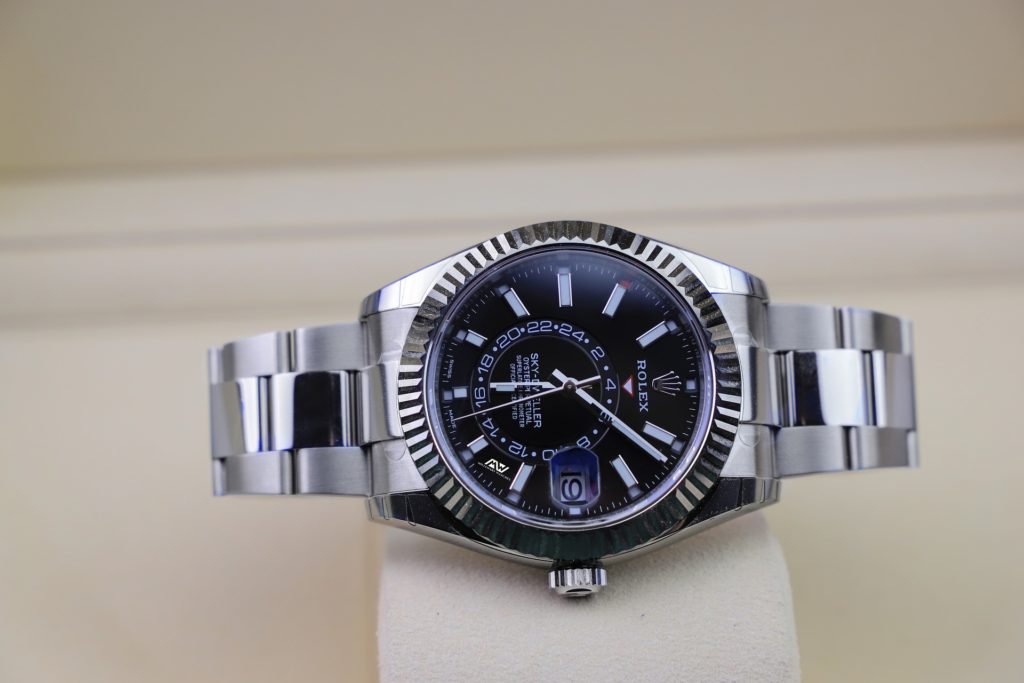 A name synonymous with Luxury Watches. Unsurpassed in the industry. A true innovator in the field of Horology. Rolex.

Hans Wildorf and his business partner and Brother in-law, Alfred Davis began in 1902. The Rolex company was born as Wilsdorf and Davis and the main line of business was buying constituent watch parts and creating high-quality watches. Maison Aegler of Bienne, Switzerland was the provider of the watch movements and one of the only manufacturers that stood up to Wildorf’s high expectations. The watch casings were sourced from Dennison Watches – a company that specialised in producing large numbers of cases, renowned for their air and watertight capabilities.

The name Rolex is said to originate from Wilsdorf’s desire to create a name that was easy to remember in any given language. There are several other potential reasons as to how the name originated by these remain unconfirmed by Wilsdorf.

Wilsdorf was a visionary. He saw a future in wristwatches when pocket watches were all-the-more common. He anticipated that should he be able to create a stronger, more durable wrist watch then the market would be wide open. During the early days, when Wilsdorf & Davis set about creating their masterpieces, they stamped the inner side of the rear case with the initials ‘W&D’ for easy identification.

Wilsdorf wanted the a brand name to be short, easy to say and remembered easily in any given language. His words were “I tried combining the letters of the alphabet in every possible way. This gave me some hundred names, but none of them felt quite right. One morning, while riding on the upper deck of a horse-drawn omnibus along Cheapside in the City of London, a genie whispered ‘Rolex’ in my ear.” Quoted Rolex.com Wilsdorf & Davis became Rolex LTD in 1908.

The following years after, Rolex continued their pursuit of Chronometric Precision. It was this that set them apart from the rest. As Wilsdorf had seen in his earlier days, wristwatches were generally inaccurate and failed to hold out. In 1910, a Rolex wristwatch was the first in the world to be granted a Swiss Certificate of Chronometric Precision, awarded by the Official Watch Rating Centre in Bienne, Switzerland. Further to this, four years later, Kew Observatory awarded an A rating to a Rolex Wristwatch – an accolade never previously awarded to any timepiece other than Marine Chronometers.

In 1919, post-war Britain, the government introduced Excise taxes on “Luxury Imports” such as Cars, Clocks and Watches and it is said that due to the unnecessary rise in costs, Wilsdorf picked up and moved the Rolex company to Geneva, Switzerland under the new name of ‘Montres Rolex S.A.

By 1926, Rolex had come leaps and bounds in the industry. They had conceptualised the first waterproof watch, still widely known as the Oyster. The watch featured a “hermetically sealed’ case, ensuring it was impervious to the elements. It’s function was later proven in 1927 by English cross-channel swimmer Mercedes Gleitze, crossing the channel in just over ten hours. It’s functionality never faltered.

The following decades saw a series of achievements for the business.

1931: They introduced the Perpetual Movement. It is/was the first automatic watch movement in a wristwatch and is still used today.

1933: The Crew on the first Everest Expedition were equipped with Rolex Oysters

The Datejust was born in 1945. It was the first Self-Winding wristwatch to feature the date on the dial.

1953: Rolex begins developing a multitude of wristwatches capable of aiding professionals in their fields of work. These were specifically Aviation, Marine Exploration (Diving), Mountaineering and Scientific Studies.

The Submariner launches. Equipped with a revolving Bezel, this allowed Divers to track their total dive time.

1956: The Day-Date debuted. The first wristwatch to display the day of the week and date upon the face. Only supplied in Gold or Platinum, it built a reputation for being a piece for the ‘haves’. The Day-Date is still incredibly popular today.

1956 also saw the Milgauss introduced. Capable of withstanding intense Magnetic fields up to 1000 Gauss. Dubbed by CERN Scientists as “the perfect Magnetic Field”.

The 1960’s saw many more ‘firsts’ from Rolex. There was the deepest dive. A ‘Deep Sea Special’ was sent to the Mariana Trench – the deepest known point of the Earths Oceans (37,800ft) where it spent 30 minutes submerged. It surfaced in full working order.

The Cosmograph Daytona – Capable of telling average speed thanks to the Tachymetric Bezel.

The Sea-Dweller – A piece equipped with a Helium release valve to allow decompression without damaging the piece.

Just after the release of the Sea-Dweller, the Explorer II followed in 1971, dedicated to Artic Explorers. This piece features a ‘24-hour hand’ to indicate day/night time hours. Incredibly useful in an environment where day and night are indifferent.

Fast forwarding to the Millenium, we saw the introduction of the 4130 Movement consisting of just 290 pieces, further cementing Rolex position on simplicity.

Since the early 2000’s, Rolex have introduced numerous models, to include:

The Yacht-Master II, The Deepsea, The Sky-Dweller and The Deepsea Challenge.

Rolex are simply timeless works of art and it shows in their sales figures. It is said that Rolex make over 700,000 units annually.  That’s a staggering 2000 per day. Hans Wildorf also founded the Tudor brand. A watch brand that encompasses the founding values but targets a different demographic. They are also considerably cheaper than some of the older and more prestigious Rolex models.

Hans Wildorf transferred his ownership of his Rolex shares to a trust in 1960, which is also the year of his passing. Although trust owned, It’s true to say that his values live on. Evidently in every single masterpiece created.

Check out our selection of Luxury Watches on The Luxury Directory